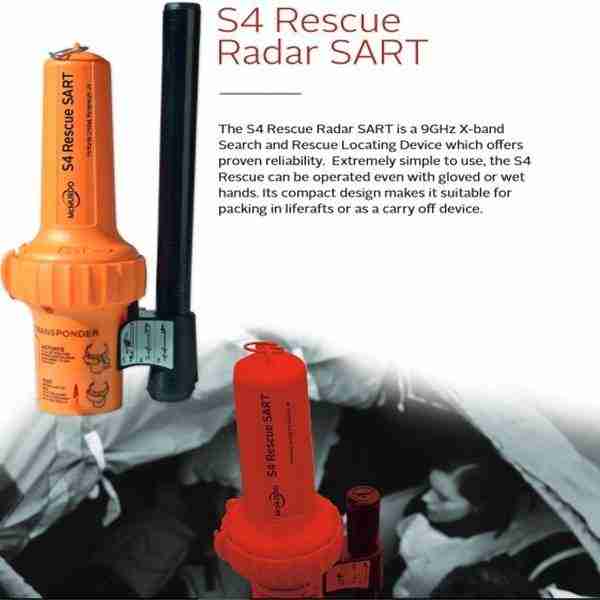 Search And Rescue Transponder (SART) is a Radar based emergency transmitter designed to be stored in a liferaft or as a carry on device in the event that it is necessary to abandon ship. When detects a incoming X-band radar pulse from another vessel or aircraft it automatically transmits a response signal, which appears on the vessel’s radar display as a series of 12 dots pointing to your location.

Radar SART is designed to only transmit when it detects an incoming radar pulse this dramatically increases the battery life, enabling them to operate continuously for typically over 96hrs.

Since 2010 the AIS-SART (Search and Rescue Transmitter)

Has been added to GMDSS regulations as an alternative to a Radar SART and has been wheel-marked since 2012. These units include an inbuilt GPS and transmit an alert message along with the vessel ID and GPS position via the AIS (Automatic Identification System) tracking system – this appears on an AIS-equipped vessel’s chartplotter or ECDIS display rather than on the Radar.

A SART forms part of the GMDSS mandated equipment package required by law for all commercial vessels over 300 tons, however many non-mandate vessels and leisure boats also choose to carry a SART to improve safety.

Rugged McMurdo S4 Rescue SART is buoyant and waterproof to a depth of 10m. When it detects a radar signal from another vessel or aircraft, the S4 Rescue SART’s 9GHz X-band Radar transceiver will automatically transmit a response signal which will appear on the other vessel’s radar display as a series of 12 dots, pinpointing your location. An LED and buzzer indicates when the S4 has detected a radar signal and transmitted a response. The S4 will only transmit when it detects an incoming radar pulse – after 15 seconds it will drop to standby mode, conserving battery life and ensuring operation in excess of 96hrs.

*Once activated the McMurdo S4 Rescue SART may be suspended inside the survival craft or mounted in an elevated position using the integrated extending pole.